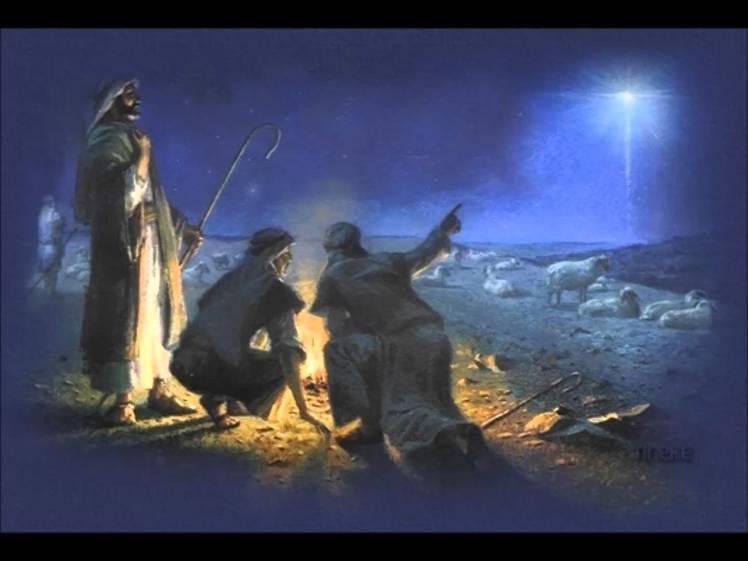 The shepherds play an important role in the Christmas story. Of all the people near Bethlehem on the night Christ was born, it was the shepherds who received the heavenly proclamation. Recently, our son brought out an interesting perspective on their visit to see Jesus on His birthday:

To this point, how much encouragement had Mary received concerning her circumstances? How many folks watched in disdain as Mary and Joseph left Nazareth, thinking the worst of this couple? The journey was difficult, and we know that she was “great with child.” (Our first son was born on January 14th. So that Christmas, we didn’t even make the two-hour journey by car to visit family!)

Mary and Joseph knew that she was carrying the Son of God, but delivering Him in a stable–I’m sure whatever ideas they had concerning the birth of their Savior, it didn’t include barn animals and a manger! Had they failed their God?

Then enters the shepherds, proclaiming that an angel had told them everything and that his description was EXACTLY as they saw: a baby wrapped in swaddling clothes, lying in a manger! WOW! We may never receive such affirmation when we doubt our way, but our heavenly Father KNOWS the purpose for every disappointment or circumstance which seems like a failure to us but is actually a part of His divine will for our lives.

The following is an excerpt from Bond Brothers, my latest book about Philemon and Onesimus. I’ve always been fascinated by the shepherds.  What happened to them after that night? Did any of them become believers, see Jesus on the cross, hear of His resurrection?

This is just the account of one writer with an overactive “sanctified” imagination! Merry Christmas!

And there are also many other things

which Jesus did, the which,

if they should be written every one,

I suppose that even the world itself

could not contain the books

that should be written. Amen.

Joram walked silently down the road to the inn. Lately, there had been some trouble. He frowned as he thought about the Pharisees and their determination to destroy The Way. If only God would change all of their hearts as He had Saul of Tarsus!

He felt certain that the man at the inn was a Gentile, and he looked wealthy. No wonder the Pharisees are worried, he mused. God was doing some mighty strange things. But the most amazing work was that He was opening the hearts of more than just Jews!

As he neared the inn, he headed to the back of the building and knocked: one knock, then two quick taps, and then another knock, and the door opened swiftly. As quiet as a mouse, he slipped in.

“Welcome, my friend,” the innkeeper named Solomon greeted. He patted the older man on the shoulder and motioned him to the front room, empathetic to the dear man’s bent frame. He waited by the door until all had entered, and then looked covertly for anyone who might be watching. He closed the door when he was satisfied that they had not been seen.

They talked in hushed tones, but Philemon had heard them through the floor—probably because he had been straining to do so! He looked at Onesimus, “You may come or stay. It is your choice.”

Onesimus’ brow furrowed. He did not have any interest in the matter, but he did not want to disappoint his master. “I’ll go.”

Quietly, they made their way to the front room, feeling like intruders until they were greeted by the men. Two that sat near the stairway rose and greeted them warmly. “Come, we are so glad that you have joined us.”

After introductions were made, the two newcomers were seated among the group. All eyes turned to Joram. “So, you said that you heard Paul. What brings you to Judea?”

Philemon looked around the group. They were obviously Jewish, and he wondered once again if he had made a mistake, but he plunged ahead. He gave a brief description of his life and family and then continued to tell them about his encounter with Paul. “Paul spoke of the Unknown God. He told us that he sent his son and that he died and rose again. Is that true?”

Heads nodded around the circle.

Philemon searched each face, “But have you seen him?”

This time a few nodded, but they looked to Joram to speak.

The man looked older than time itself. His eyes fixed upon Philemon and then Onesimus, making the younger man squirm. “How old are you, son?” he asked.

Onesimus looked surprised that he would speak to him instead of his master. “Twenty-six, sir.”

Joram nodded slowly, a smile crinkling his already wrinkled face. “I was twenty-three when I first saw Him.”

The others grunted and nodded, obviously enjoying the well-worn tale that was about to unfold.

“I will never forget it, that night in the fields of Bethlehem. It was my turn to tend the sheep, and I remember trying to finagle my way out of it.” He shook his head. “That would have been the biggest mistake of my life.”

Everyone sat on the edge of his seat, waiting for the story to continue.

“It was an absolutely brilliant night. The stars were shining so brightly that night—more stars than I had ever seen. Something seemed different somehow—a tension or excitement in the air. Even the sheep seemed restless. Then he came.”

“Praise Jehovah,” someone shouted and was soon hushed by the others.

“The son of God?” Philemon asked.

The men just looked at him, as though they had forgotten that he was there.

Joram smiled, “No, my son. The angel of the Lord!” He stopped, relishing the memory.

“Tell him what he said, Joram,” one of the others urged.

“Fear not: for, behold, I bring you good tidings of great joy, which shall be to all people. For unto you is born this day in the city of David a Savior, which is Christ the Lord. And this shall be a sign unto you; Ye shall find the babe wrapped in swaddling clothes, lying in a manger.”

Philemon looked on, trying to comprehend what the man was saying. “You mean the son of this God was born in a stable?”

“That makes no sense. Are you sure you heard him right?” Philemon asked impatiently.

Joram’s face grew serious. “We did because after the host of heaven appeared praising God, we decided to go and see for ourselves.” He stopped as though that was enough.

“And?” Philemon asked,   urging him to continue.

“He was there, just as they said He would be!”

Philemon shook his head. “A stable? The son of God was born in a stable?”

“But that makes no sense,” Philemon again demanded.

“It makes perfect sense if you know the Son,” Micah countered.

“Well, obviously I do not.” He sighed in frustration. “I have never been a religious man. Certainly, I thank the gods for rain and sun and good crops. In fact, I was in Athens partly to offer sacrifices on my wife’s behalf. But I live my life, and they live theirs.”

“Then why did you come here seeking answers?” Joram asked quietly.

“I just…” Philemon thought for a moment. “I cannot seem to get Paul’s words out of my head.”

“You have heard Paul speak,” one man asked incredulously.

Judah smiled. “That is Jehovah’s Spirit drawing you to Himself. Do not ignore it, my friend. You have been given a great gift.”

“But why would God want to have anything to do with my life?” Philemon felt uneasy with the statement.

“He wants you to know Him and to love Him,” Joram said softly.

“But if He is God, then why does not He just make me love Him?”

Joram’s eyes were full of compassion as he spoke. “You said you have five sons. Truly God has been good to you. Tell me, would it mean more to you for your son to come to you and express his love to you on his own; or would it mean more if he came because you made him do so?”

Philemon’s face softened as the truth of the statement deflated his argument. “I suppose the answer is obvious.” His eyes traveled from one face to the next until they locked with Onesimus. The young man seemed to be mocking him, questioning him for meeting with these men. He sat up straighter. “So, where do I go to give sacrifices to this Unknown God?”

The old shepherd sat quietly for a moment staring deeply into Philemon’s eyes. Behind the brisk question, which he knew was given to regain his composure, there was an uncertainty—a longing. “In here, my son,” Joram said as he reached out a gnarled finger and tapped Philemon’s tunic. As much as he wished to take this man completely to the truth, he could sense that the spirit of doubt was pervading the man’s heart. “Keep searching and you will come to the truth.”

The way home was a silent one. Philemon’s heart was in a turmoil, and he longed to talk to the men again, but they had all gone to parts unknown, and it was time for him to head home. He thought back to the evening’s conversation: the incredible story of the supposed Son of God’s birth, the excitement, and peace he read on each face, the loving look given to him by the old shepherd, and then the mocking look that Onesimus had given him. Perhaps he had read Onesimus wrong last night. Leading their mounts to a shady spot beside a stream, Philemon dismounted and pulled a loaf of bread from his satchel. Onesimus soon joined him on a grassy spot near the cool water.

“So what do you think of the Unknown God?” Philemon ventured, casting a sideways glance Onesimus’ way.

Onesimus shrugged, picked up a stone, and tossed it into the water. “Why would a God choose to be unknown? How can your peons worship you if they do not know you?”

“True.” He could tell by the young man’s tone that he was not interested, yet he pushed on. “But do you not have any desire to understand all this?”

Onesimus sat a bit straighter, his eyes dark. “If there is a God that has any dealings with my life, then why did he take away my family and make me a slave?” The last word was spat forth like poison as he rose and went to tend the horses.