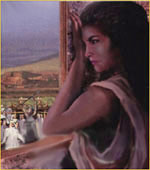 Where would that be, a safe haven for husbands? Well… it should be with his wife: Proverbs 31:11

The heart of her husband doth safely trust in her, so that he shall have no need of spoil.

The heart of her husband trusteth in her, And he shall have no lack of gain. (ASV)

The heart of her husband has faith in her, and he will have profit in full measure. (BBE: Basic Bible in English)

The heart of her husband trusts in her confidently and relies on and believes in her securely, so that he has no lack of [honest] gain of need of [dishonest] spoil. (AMPC: Amplified Bible, Classic Edition)

There it is! But what does it look like to have a wife in whom he can trust, have faith in, believe or rely upon? Sadly, I can tell you about the opposite from my own experience. 😦 A husband does not feel safe to trust his wife because…

When David brought the ark into Jerusalem, he was excited—very excited and for obvious reasons. His last attempt had ended in failure and the death of Uzzah (2 Samuel 6:6, 7). For three months, the ark is housed by Obededom and God blesses him.  Meanwhile, David is getting his heart right and makes preparations to move the ark properly—according to God’s law. His heart is clean and his actions are right. He is…

Michal, David’s wife, looks out the window, sees David “leaping and dancing before the LORD” and she despises him (v. 16). There are so many reasons for her to be out of sorts. Their culture was so different from ours, but her words to David when he comes home to bless his household are classic bitterness.

Then David returned to bless his household. And Michal the daughter of Saul came out to meet David, and said, How glorious was the king of Israel to day, who uncovered himself to day in the eyes of the handmaids of his servants, as one of the vain fellows shamelessly uncovereth himself! (v. 20)

Will David go to her again? No. His words are caustic and cruel as well. The chapter ends by saying that Michal never has children. She is not even referred to as David’s wife but as the daughter of Saul. How sad!

As wives, we could certainly side with Michal and list a dozen “yes, but he…” We are not married to perfect husbands and our husbands do not have perfect wives, but when trust is gone, the cornerstone of any marriage crumbles!

Love him! Listen to him! If he has not felt safe with you, dear wife, rebuild that trust little by little and watch your marriage flourish! This might be very hard for you depending on your situation, but try it—what do you have to lose? Remember, Beauty and the Beast:

Beauty and the beast

One thought on “Safe Haven for Husbands”